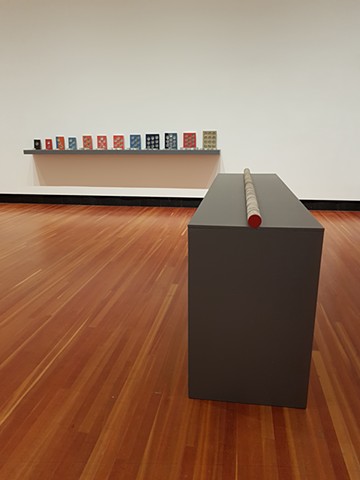 Core Sample: A Century, I collected discarded books from the curb-side for a year. Some of the books were very old and some were relatively new, with publishing dates that spanned over a century. So, I arranged them chronologically and bore through them to make an eight-foot long core-sample.

My plan was to cross-reference literature with the notion of a geological core sample by physically boring through a cross section of found books, as though the books themselves were the source of some kind of epistemological accretion. Boring holes through books is a conceptual transgression that challenges their function and repositions them as objects under investigation. Twelve Volume Set, On my evening walks I like to pick up books that people leave on the curb as a free offering to passers by. I removed a single core sample from the first book that I found, a second core sample from the second found book and so on... embedding one code within another.